A Chinese billionaire with deep pockets and a love for history & preservation has followed through with his plans and finished a five-year restoration of one of Vancouver’s largest historic properties, The Rosemary. Mingfei Zhao, a retired property developer from Beijing, purchased the derelict mansion in 2014 for $11 million CAD with big plans for the future. Two years into the project, Zhao told CBC in 2016, “As new landed immigrants, we should make some contributions to protecting and repairing heritage architecture.” He revealed that he had already spent close to $6 million and hadn’t even touched the kitchen or bathrooms. He figured he still had at least a year and a half more of work to do. Jim Perkins of FairTradeWorks told CBC, “Some of the rooms had 20 coats of paint on them, since it had been used by the movie industry for years.”

The Rosemary was designed by architects Samuel Maclure and Cecil Fox and built in 1915 for liquor tycoon Albert Edward Tulk. At the time of construction, it was said to be the largest and most expensive house in British Columbia. The Province reported that the house took nearly a decade to build with permits showing the 14,200 square foot main house and 2,200 square foot carriage house costing $75,000 and a detached greenhouse an additional $3,500. The Province recounted The Rosemary’s history, “It survived by becoming a rooming house, then was turned into a retreat by the Congregation of Our Lady of the Retreat in the Cenacle, which owned it from 1947 to 1994.” It was also once home to John William Fordham Johnson, the 14th Lieutenant Governor of British Columbia. Restored interior details include beamed ceilings and walls panelled in mahogany, walnut and oak, a grand oak staircase, 11 fireplaces and new modern upgrades such as a La Cornue/Gaggenau kitchen with rosewood island, separate caterer’s kitchen and luxurious bathrooms throughout. With Zhao’s drive to restore the massive mansion, he has ensured The Rosemary will stand for another century. The Rosemary is on the market for $26.9 million CAD with Will McKitka and Kevin Hardy of Sotheby’s International Realty Canada. You can also explore the mansion via a 3D Matterport tour here! 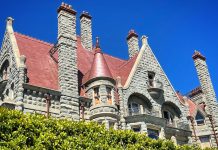 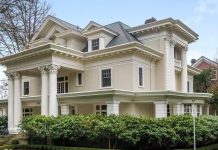 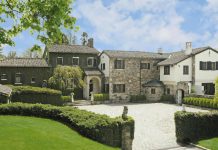 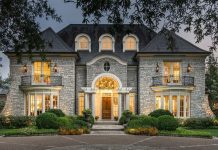 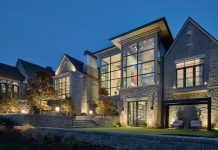 $9.35M Modern Manor For Sale in Tennessee’s “The Grove”