The Burrage Mansion, widely regarded as one of the most impressive addresses on Commonwealth Avenue in Back Bay, showcases some of the grandest rooms in Boston. The landmark mansion was designed by architect Charles Brigham in the French Chateauesque style for Albert C. Burrage, an industrialist, attorney, horticulturist and philanthropist, and remained in his family until the death of his wife, Alice in 1947. The property was utilized as medical offices in 1948 and converted to an elder-care facility in the 1990s before ELV purchased it with plans to renovate the mansion into several high-end residential units. ELV Associates, Inc. wrote, “The mansion’s renovation into five luxury residences included reunifying the oval dining room, matching its limestone fireplace mantel, mahogany paneling and ornate plaster-ceiling detail, but also subdividing the lobby without marring its historical integrity. All five units sold upon completion in 2003.”

Tom Brady, American football quarterback, previously owned a unit in the mansion, Variety reported in 2008 that he had put his 3,412 square foot residence on the market for $5.3 million. One of the most extravagant units is the mansion, Residence One, occupies nearly 4,400 square feet with painstakingly restored formal rooms and a fabulous updated kitchen in Burrage’s original conservatory. The 3 bedroom, 4.5 bathroom unit last sold for $4.3 million in 2013 and hit the market in early 2019 for $7.9 million. It sold in October 2019 for $6.3 million. Real Estate by Boston reported that the remake of Little Women filmed in the formal living room. 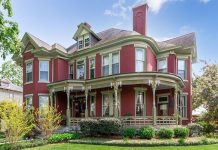 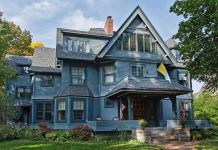 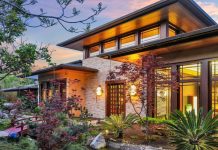