A sprawling Point Piper mansion owned by accused murderer Ron Medich has been listed with LJ Hooker.  The 5 bedroom, 7 bathroom waterfront estate includes a swimming pool bordering the Sydney Harbour, staff quarters, commercial kitchen, and walls of glass.  While it’s been unofficially listed for more than a year, the new listing agent is looking for expectations of up to $40 million.  Sydney Morning Herald reports that Ron Medich was arrested in October 2010 over the 2009 murder of his business associate Michael McGurk. 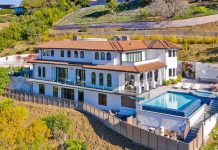