Second Empire farmhouse floating around Pinterest showing the ornate structure in a neglected state. We found a fabulous photo taken by Doug Copeland in 2012 showing just how severe the deterioration was. Thankfully, it appears the historic home has since been restored and is looking fantastic on Google Streetview! Doug Copeland also has a great history of the property attached to his photo on Flickr: “Charles Crittenden began construction of Castle Hill March 13, 1878, with a detailed ‘article of agreement’ with builder David Myers, Wayne County. The pact used the home of John Flukes as a guideline. It specified such materials as ‘the best Vermont slate’ for the roof, certain styles of flues, plaster and woodworking, brass fixtures, porcelain doorknobs and indoor shutters at every window. A central feature of the house is the mansard roofed tower which rises above the northeast corner over the main entrance. There is an unusual amount of carved wood ornamentation around the windows and the bracketed cornices. The 15-room house with its 10-foot ceilings was built for $2,700. The tower pediments and decks on the roof were added in another agreement in August of that same year, at an additional cost of $425. The structure, highlighted by an open stairway that makes one complete spiral from the ground floor to the top of the tower, was finished in 1880. The house sits upon a 660-acre farm originally owned by Nezer Sutherland who is buried in a small family cemetery on the grounds.”

On April 1982, the Crittenden Farm was listed on the National Register of Historic Places as a historic district, qualifying both because of its historically significant architecture and because of its place in local history. Composed of eighteen contributing properties (fourteen buildings, three other structures, and a site with no buildings), the district includes the farmhouse, various outbuildings, and miscellaneous other structures; unlike the farmhouse, some of the buildings feature an Italianate style of architecture. Photography by Doug Copeland and Equinox27. 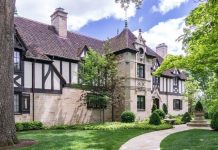 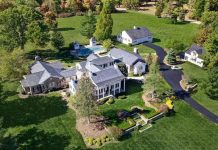 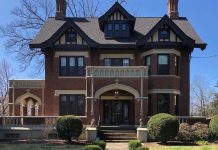 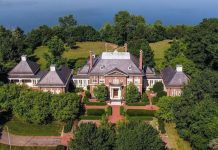 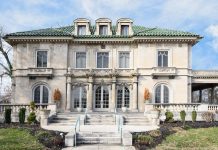