Update October 2017: Reduced to $9.9M! Talk about a price cut. A Chicago-area mansion with over 27,000 square feet of floor space has recently been reduced to just $9,999,999, it had previously been listed as much as $32,000,000.  Sitting on a 2.25-acre estate, the palatial manor has become a MLS landmark in the Chicago-area after sitting on the market since early 2010. The manor was designed by world-renowned architect Richard Landry and was put on the market shortly after construction. It was the dream of investment CEO Sherwin Jarol, and wife Deborah, who reportedly sunk over $40-million into the construction.  In 2011 it was reported that the residence would be heading to auction with Concierge Auctions and would be selling to the highest bidder, it’s unknown what became of that sale. Breathtaking grounds & a swimming pool surround the perfect Limestone masterpiece with state of the art security and ultimate privacy. No expense was sparred in the creation of this truly spectacular home, from the two-storey rotunda entrance, to the DeGiulio kitchen with sitting room & breakfast room this home was made for entertaining on a grand-scale.  The residence also features an impressive formal dining room, an elevator, home theatre, spa, winer cellar, 11 fireplaces, and garage space for 10 vehicles.  There are a total of 6 bedrooms and 13 bathrooms throughout.  It’s now listed with @Properties Highland Park. 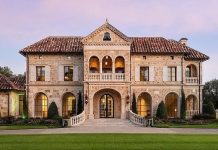 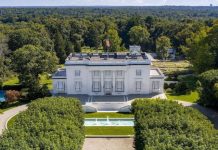 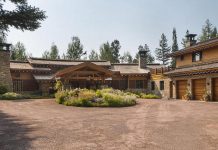 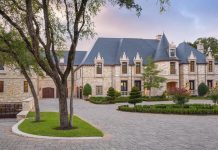 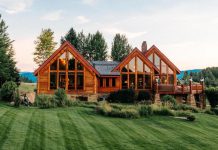