A limestone garden gate along Deerpath Road is a dignified entry to this stunning home which evokes Edwardian formality with pre-war Beaux-Arts fashion. It was designed by architect Frederick Wainwright Perkins, the same architect responsible for Lake Forest’s iconic Schweppe Estate, and was built c.1916 for Finley Barrell, a prominent Chicago grain dealer. The 7,405 square foot mansion has been on and off the market since 2011 for as much as $3.85 million and just relisted for $3.1 million. Over the last decade the current owners have been doing necessary maintenance and upgrades to both the main house as well as the 2.21 acre property. Between 2013 and 2016 there were extensive additions to the current landscaping including the addition of dozens of flowering trees.

The City approved the creation of a garden along Deerpath, incorporating the original garden gate. Additional upgrades included a new boiler and furnace controls in 2010, upgraded 240V, 220 amp electrical in 2007, remodelled bathrooms, a precise replica of the front marquee by Allen Ornamental Iron in Alabama at a cost of $300,000, a new simulated vinyl slate roof in 2002 and new white oak herring bone flooring in the kitchen. The floor plan includes a gracious foyer in the Italian style with marble imported from the Carrera quarry in Northern Italy and hand carved by Italian marble carvers on site. There is a large living room with cherry panelled walls, fourteen piece mouldings and French doors opening to a loggia and patio. The fireplace in this room is c.1664 wood burning but currently fitted with gas logs. The beautiful kitchen with custom cabinetry, butcher block island, marble island features seating for six and commercial grade appliances. The master suite occupies the east wing of the home with updated his and her baths and the original built-in wardrobes. There are a total of six bedrooms and seven bathrooms throughout. The meticulous care the home has received in the last 21 years by the current owners along with necessary updating has created a residence that will continue to inspire the love of architecture. It’s on the market for $3.1 million with Marcia Rowley of Coldwell Banker. 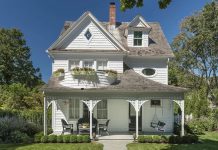 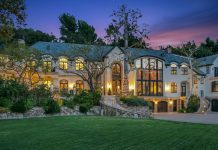 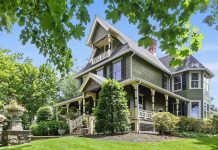 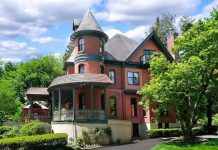