Entrepreneur and business magnate Elon Musk has sold his 1912 Mediterranean Revival in Hillsborough, California for $30 million after announcing plans to relocate Tesla’s headquarters to Austin, Texas. The 50-year-old billionaire purchased the property in 2017 for $23.36 million and listed it earlier this year for $37.5 million. The landmark property is touted as one of the largest parcels of land in the Hillsborough area with an enormous 47 acre footprint. Listing Details: Sitting on the San Francisco Peninsula with sweeping views of the San Francisco Bay and City Skyline, this 1912 residence has been transformed for today with renovations throughout including a fully restored and expanded 5-star kitchen with space for a personal chef, the grand living room with restored windows & doors, a library with leather walls & fireplace, bathroom updates, and a new option created for a second primary suite. Separate cocktail room and dining room. Behind the scenes, upgrades to infrastructure include fiber optic cable under the driveway, high end security system, interior sound system and restoration to several of-the-era features. Just 15 minutes to SFO airport & private jet center. Reservoir on the property for landscape irrigation. Musk tweeted in 2021, “Decided to sell my last remaining house. Just needs to go to a large family who will live there. It’s a special place.” The property was on the market for $31.9 million with Mary & Brent Gullixson of Compass. Photography and information found on agent’s listing. 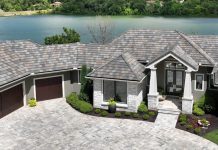 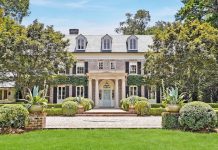 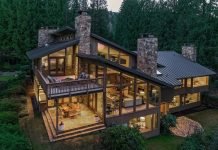 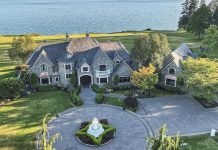