Connecticut-based firm Pagliaro Bartels Architects has earned a reputation for exceptional waterfront architecture throughout North America. The award-winning firm was founded in New York in 1974 as a design studio by architect Roger Bartels. One of the firm’s more unique projects sits right on the beach in Fairfield, Connecticut. Built on a relatively narrow lot, the shingled home rises three-stories with an asymmetrical front facade with a pair of garages, varying window shapes and sizes and a commanding chimney. Designed to capture views across the Long Island Sound, the rear facade features a central volume, flanked by a pair of towers, lined with floor-to-ceiling glass with the two upper floors opening to large balconies. The interiors are just as unique as the exterior architecture. Notable features include a winding multi-storey staircase, a large great room with beamed ceiling and fireplace, panelled den, barrel-vaulted master suite with private balcony and a spectacular glass shower built to resemble the bow of a ship. We researched the property and were unable to find any record of it being for sale. 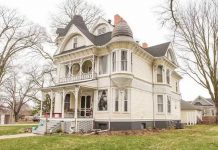 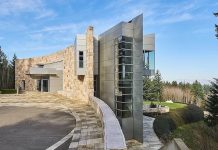 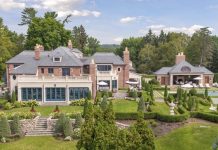