One of the largest homes in Brookline, Massachusetts has sold for $23 million after 4 years on the market and price reductions amounting to $67 million. Former Reebok CEO Paul Fireman developed the property in 1999, commissioning architectural firm Shope Reno Wharton to design the 26,623 square foot mansion. It sits a stone’s throw from Chestnut Hill and in close proximity to Boston College and many other significant landmarks. Construction lasted 22 months from footings to completion, according to Bob Packard, senior project manager for Kenneth Castellucci & Associates. Turf walkways and pathways meander through this extraordinary landscape and the winding driveway provides a multi-step reveal of this unique estate and its residence. Firestone listed the mansion in 2016 for an ambitious $90 million. It was reduced to $69 million in 2018 and again earlier this year to $33 million. The Los Angeles Times reported the sale, revealing that Fireman sold Reebok to Adidas in 2005 for $3.8 billion.

The curving façade of Indiana limestone creates a home of singular distinction with 26,000 square feet (some publications suggest 32,500 square feet) of luxurious living space with eight bedrooms, seven full and five half bathrooms. Every exterior and interior stone was individually hand drawn ensuring a flawless finish. The appearance of simplicity is the ultimate challenge, achieved by creative architecture, sophisticated engineering and generations of the finest craftsmen. Enjoy more than 7 acres of rolling lawns, ponds, sculpted rock outcrops and a horticultural encyclopedia of specimen plantings. See more photos at Shope Reno Wharton. It had been on the market with The Sarkis Team of Douglas Elliman. 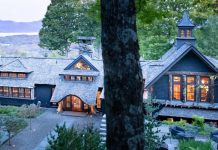 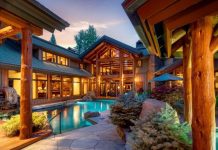 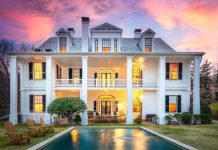 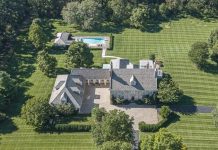