A spectacular all red residence with incomparable shingle detail in Oyster Bay, New York is on the market for $4.9 million. Designed by architectural firm Ike Kligerman Barkley and built in 1997, the 8,000 square foot residence is described as a marriage of American Shingle Style and English Arts and Crafts, creating a truly spectacular custom home. Thomas A. Kligerman wrote in a blog post in 2014 that the saturated shingle style residence was inspired by architect Philip Webb’s iconic Red House in Bexleyheath, London. The five bedroom, nine bathroom home sits on a five acre property with four car garage, formal gardens, inground swimming pool and matching pool house. There are a selection of photos below by Custom Shingles, a shingle company who worked on this project. From the listing: “Its floor plan encompasses a unique and open feeling with public rooms in the west wing and service and leisure rooms in the east wing. Each wing has its own spectacular staircase; the east accesses all three floors; the west accesses only the second floor that houses five generous bedroom-bath suites. The ultimate retreat and entertainers delight, the property includes ample parking, an attached four-car garage, and an oversized pool with expansive brick patios and a delightful pool house.” The home is on the market for $4.9 million with Maria Babaev of Douglas Elliman. Photography and information found on agent’s listing. 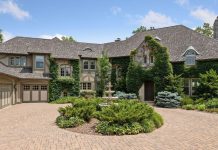 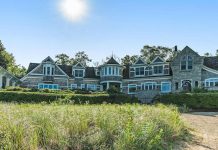 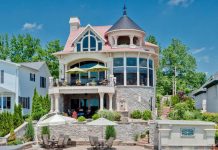