Known for his gothic fantasy films like Beetlejuice, Edward Scissorhands, and The Nightmare Before Christmas, legendary film director, Tim Burton, rented this Paris-inspired contemporary London home while he filmed Dumbo for Disney. The unique residence recently hit the market for £20 million. Eglon House is inspired by Pierre Chareau’s iconic Maison de Verre and is one of the most extraordinary newer homes to be built in London. The modern home offers 13,000 square feet of beautifully crafted live and work accommodations, composed of two interlinked buildings, set around a private courtyard and joined at basement level. The house has been designed with flexibility in mind, and many of the spaces would suit a variety of uses. It could be used as a dwelling, as a commercial building, or as a combination of the two. It would work equally well for a family requiring guest or staff accommodations as it would for an art foundation requiring premises with significant spatial drama.

The larger, eastern, side of the building has an industrial character, with exposed concrete ceilings and surface-mounted services. At its centre is a magnificent double-height grand salon, with a galleried level containing a professional kitchen and dining room. The first floor offers more than 2,000 square feet of space, currently configured as a breathtaking master bedroom suite, and the second floor contains an extensively glazed “orangery” that would work particularly well as an office. The western side of the house has a more intimate, domestic scale and an Art Deco atmosphere. The ground floor opens out onto the courtyard, with a double-height living room and a kitchen. The first and second floors contain three bedrooms, three bathrooms, and a study. There is a further bedroom and bathroom in the basement, alongside a remarkable swimming pool that doubles as a cinema room, with a mechanical floor and waterproof screen. A lift services all of the floors. Eglon House is on the market for £20 million with Howard Kayman of Aston Chase. 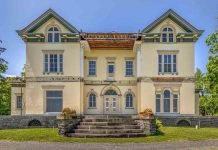 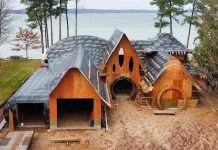 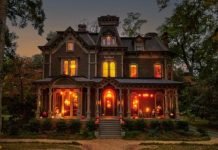 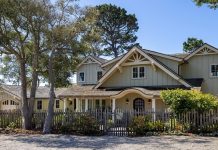 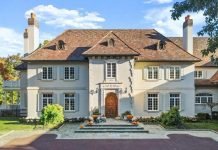 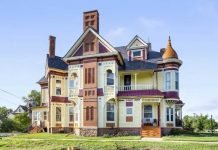