Architect Tom Ellison of TEA2 Architects and interior designer Jeanne Blenkush were commissioned by former CEO of Target, Bob Ulrich, to create a 9,000 square foot contemporary home taking inspiration from the houses and cottages of the English Arts and Crafts movement.

Architectural Digest ran an article profiling the project in June of 2008, Ulrich said, “We talked about curves, we talked about warmth, we talked about natural materials and the flow of space. And while we wanted the house to be low-key, we also wanted something unusual.” A 1.5 acre pie-shaped piece of property overlooking a pond in Minneapolis was the starting point, from there, the team designed a two-storey residence with a subtle curve and topped with Vermont green slate roof tiles. According to TEA2, the interiors were designed to showcase the homeowner’s large African art collection, you’ll notice several built-in areas to display and showcase art of various sizes and a flat roof zone with skylights filling the interior with natural light. Designed around the site’s natural slope, the street side of the residence is a single storey while the backside reveals a lower storey with a fabulous walk-out family room. Every space is meticulously designed and masterfully executed, from the large island kitchen with bay window to the curving built-in bar on the lower level, every detail is unique and awe-inspiring. Architectural Digest also revealed that there is a bullseye target in the form of a piece of modern art placed near the front door. According to TEA2, the homeowners were so pleased with the end result that they commissioned a second home. 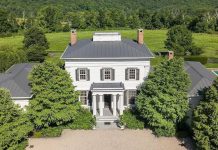 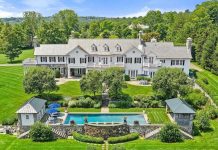 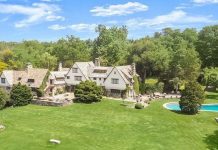