An iconic Kansas City, Missouri mansion was destroyed by fire late Thursday night.  Owners Charles and Patty Garney escaped unharmed after wife Patty noticed flames.  The nearly 15,000 square foot English Manor had previously been on the market for just $4.2 million but was removed last year.  KCTV5 said the Garney’s often hosted fundraisers and other events for prominent politicians and charity organizations at the home.  The residence included meticulous architectural detail throughout including a sweeping spiral staircase, impressive two-storey great room with skylights, a panelled formal library, and a banquet styled lower level.  The cause of the fire is currently unknown, but it’s believed to have started in the attic.  The entire slate roof is nearly gone.  Fire officials estimated the damage at around $8 million including contents.  The couple plan to rebuild.  To see all the photos of the mansion before the fire click here. 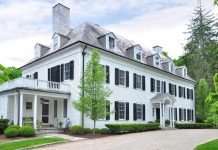 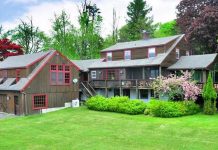