Up for sale is the former estate of hollywood legend Katharine Hepburn, who lived here for many decades before her death in 2003 at the age of 96.  The property has been listed at $28 million for a 3.45 acre parcel or $18 million for a 1.47 acre parcel.  It’s been in the Hepburn family since 1913, they originally bought it as a summer house.  The original structure was severely damaged in 1939 by a hurricane and was rebuilt.  The estate was bought in 2004 for $6 million by Barbara and Frank Sciame and was completely renovated.  His original intentions were to renovate it and sell it shortly after but his family fell in love with it and spent many summers there.  Renovations included raising the main house by 5 ft., he also divided the property into three lots which are available for purchase separately.

The home is approximately 8,368 square feet and includes six bedrooms, eight bathrooms, seven fireplaces, a spacious master suite with gorgeous views, several vaulted ceilings and a lovely gourmet kitchen.  Miss Hepburn holds the record for winning the most Best Actress Oscars, triumphing for Morning Glory in 1933, Guess Who’s Coming To Dinner in 1967, The Lion in Winter in 1968, and On Golden Pond in 1981.  This is a rare chance to own the former home of a Hollywood legend. 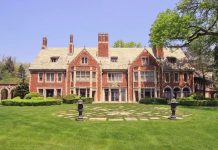 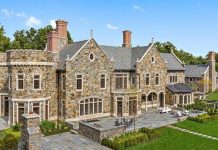 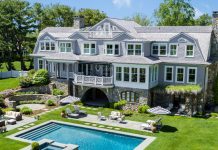