2010 – A Year of Extraordinary Real Estate

As a new year takes off it’s time to reflect on some of the most notable sales of 2010.  While some homes were able to fetch very close to their asking price, many weren’t as fortunate.  Le Belvedere, which was owned by Mohamed Hadid sat on the market for $85 Million and finally sold for $50 Million – a little more realistic.  One of our “Top Pads of 2010” is obviously Dean Gardens – originally listed at $40 Million the home finally sold for $7.6 Million and has begun demolition.  We were lucky enough to gain access to the property for a Private Tour to see this gem before it’s demise.  We’ve put together a list of Pricey Pads Top 5 Pads of 2010!

Dean Gardens has been on my mind since 2003, so when I heard it had finally sold in July 2010 I was extremely excited!  Soon after rumours began that the new owners were going to tear down this legendary estate.  I did a little research and it turned out that movie mogul Tyler Perry had indeed purchased Dean Gardens, and the rumours were true that he was going to tear it down.  I couldn’t believe what I was reading, who in their right mind could demolish such a piece of art!  I had always dreamed of visiting Dean Gardens, so now I had under a month to make those dreams come true.  Still to this day, I can’t believe that everything turned out perfectly.  Not only did I gain access to a Private Tour at Dean Gardens but I made a new friend, Christopher Dean, the guy behind all the interior design.  Without Chris I would have never been able to make my dream come true, so thank you!  Dean Gardens was on the market for nearly 17 years and was originally listed at $40 Million.  In 1995 Michael Jackson almost bought the property as a surprise for Lisa Marie for $26 Million but the deal fell through, when the NY Times ruined the surprise.  The property remained on the market undergoing many price drops until it’s final sale price of $7.6 Million in 2010, an absolute steal.

Since Pricey Pads is located in Vancouver we try to post as many unique local properties as we can and I think this one is one of the best.  Newly constructed sitting on a .42 Acre lot, this Top Home of 2010 was designed to take in the sweeping city & ocean views.  Offering over 7,000 Sq. Ft. of space with 6 Bedrooms and 7 Bathrooms it’s really no surprise this Estate Sold so close to it’s asking price.  The home really exceeds outside with it’s extreme outdoor living terraces overlooking the ocean & pool below.

This is one of the ultimate residences located on Billionaires Beach where celebrities such as Jennifer Aniston call home.  Situated on three quarters of an acre with 180 feet of frontage on Malibu’s famous Carbon Beach.  The home is approx. 12,700 Sq. Ft., includes 8 Bedrooms, 12 Bathrooms and a surprising amount of fireplaces….9!  Unbelievable views from nearly every room as well from the terraces including the rooftop widow’s walk.  This property has an extreme difference between the asking price of $57 Million and the final sale price of $36.9 Million – somebody did some negotiating!

This “Top Pad of 2010” takes the cake for price reductions and a final sale price nowhere close to it’s actual value.  The home which was owned by the Atkinson Brothers was surrendered to the bank and put up for auction.  Costing over $26 Million to built, this particular house was the largest asset the brothers had.  With only one bid at $4.75 Million the home sold for nearly nothing compared to the value of $26 Million.  The sale of this Mansion shocked many locals in St. Louis as well as Real Estate followers worldwide.  The buyer, NFL Agent Harold C. Lewis, was the single bidder of the Estate and therefore got one heck of a deal.

Kimora Lee & Russel Simmon’s Saddle River Mansion has had it’s fair share of time in the spot light.  The extravagant somewhat over the top estate was originally listed at over $23 Million and apparently sold for only $13.9 Million.  The home which is an entertainers dream includes over 35,000 Sq. Ft., 10 Bedrooms, 12.3 Bathrooms as well as an Indoor Pool and state of the art “Commercial Theatre!”    Recent reports are saying the home didn’t actually sell…and is currently on the market for $17 Million. 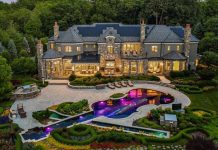 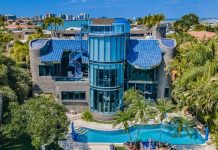 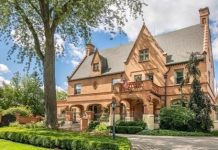 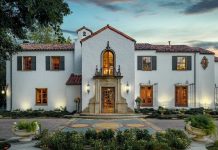 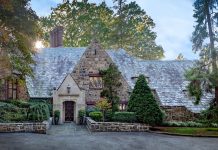