Theme Park Connection is honored and proud to showcase this home for sale by owner and designer, Mark Hurt. Mark, a Disney Contractor and owner of the company Constructioneer, built this home in 1996, and was inspired by the Disneyland Haunted Mansion to copy it down to the finest of details.

After knowing this was the community Hurt wanted to live in, he had the chance to build his home in the Garden District of the neighborhood. Well, after Mark was shown eight stock home designs by the architect, he didn’t want just any home, he wanted his to be different. Mark approached the architect about building a house modeled after the Disneyland Haunted Mansion since it fit with the New Orleans style homes in the neighborhood, and from there a spark had ignited. Not only was he excited, but the neighbors and local media also caught wind of the design, and all took notice of his work.

Mark, who is no stranger to Disney projects, made sure the design matched the dimensions and architectural structure of the real Disneyland Haunted Mansion as closely as possible. Hurt was even able to measure the real Disneyland Haunted Mansion himself to create the actual size of his own home. Incredibly, he found the actual foundry that Walt Disney had used to make the iron details of the original Haunted Mansion and had them make the iron for this house. Of course he had to adhere to building codes on things like the windows and opted out on the wraparound porch since he felt that it wouldn’t be used, but the details remained spectacular.

The details start with an original Haunted Mansion Gate sign at the front with the four iconic pillars welcoming you to the home with the authentic green hand-welded iron railings. Even on the roof, there are the four faux smoke stacks that match the Disneyland Haunted Mansion to a tee. Flickering lights and outside elements add to the uniqueness of the replica of the home’s exterior.

Of course he had to add other elements to make the home livable like real bedrooms, bathrooms and a mailbox, but has included unique interior design elements as well.

With over 10,000 square feet of livable space that includes 7 Bedrooms and 6 Baths, there is a lot of room to entertain in this home. The home is no stranger to parties as it has hosted many themed parties and even two weddings. Mark said that the neighbors would ask to come into the house on Halloween because of a specially themed bathroom that is featured on the 1st floor. In this bathroom, Mark created an actual animated ghost scene. By secrets only known by Theme Park Connection, when you are washing your hands, the lights start to flicker and the Haunted Mansion attraction music sounds and to your surprise a ghost appears in the mirror. (video of this can be seen on our web site)

The other elements of the home are more reminiscent of a real Mansion, and Mark has assured us that it is not actually haunted since he has lived in the home for many years with his wife and son.   What makes this home so great as well is there is room to add your own details inside by finishing the In-Law/Nanny Suite, 4th Floor Guest Suite and is ready for a birdcage elevator to be added similar to the one in Disneyland’s Private Club 33 Restaurant. What is most impressive is the basement with a room that measures 41 feet long by 18 feet wide with 13 feet tall ceilings that could be made into a huge home Movie Theater.

Hurt is selling the home because he has moved on to an even more ambitious project, but hasn’t stopped designing and building unique Disney inspired buildings. Mark is now working on a resort-themed house modeled after Disney’s Grand Californian, along with a replica of Walt Disney’s backyard barn, and a pool that will be themed to the Jungle Cruise. Hurt says that “Walt Disney was the mentor that I had, but never met,” and hopes that someone can add their own style to this Disneyland Haunted Mansion inspired home and complete the dream. 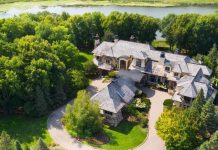 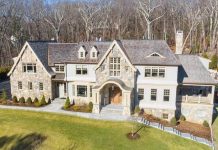 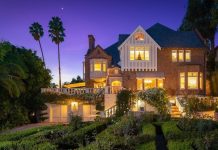 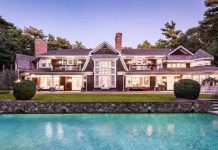