A lovingly restored historic home with roots dating to c.1925 has sold for $1,320,000 in Wayne, Pennsylvania. It had previously been on the market as much as $1,942,500 in March 2018 and most recently for $1,795,000. Designed and built in c.1925 by Frank Stephens and extensively restored from 2014-2016 by Period Architecture Ltd. alongside Linda Phillips Design LLC and Trey Halkett Woodworking, this gorgeous Tudor residence offers just under 5,000 square feet of architecturally mesmerizing space on a 0.59 acre property. The main focus of the restoration by Period Architecture was rectifying an earlier substandard renovation, doing so revealed many period details and character which were then restored to their original splendor. Period Architecture noted, “The home features many of the markers of the Arts and Crafts movement, among them a raised wooden platform in the “church room” – that was once used to put on Shakespearean productions for its music- and drama-loving members. Above the platform is one of the showpieces of the home, an arched stained-glass window depicting Saint Francis, Italy’s patron saint of animals, whose birthplace – the Italian hill town of Assisi – gives the home its name. The loft over the chapel room is original to the home and was converted into a family workspace and craft room. Restored hand-hewn wood beams, hand-carved limestone fireplace surrounds, and wrought iron hardware and fixtures, combined with new stone interior walls, cast stone Gothic arches, and iron gas lanterns are just some of the countless touches – both large and small, added and preserved – that lend the residence an air of authenticity and a marked sense of time and place.” The home is surrounded by a stone wall and capped with a multi-coloured slate roof. There are 5 bedrooms and 5 bathrooms throughout. All before photos are courtesy of Period Architecture Ltd. and are shown in black & white. Photos by Angle Eye Photography. It was on the market for $1,795,000 with Berkshire Hathaway. 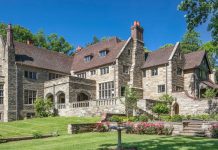 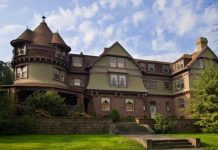 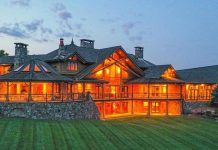