In a quiet valley on the outskirts of Yeovil lies a Jacobean manor house known as Newton House which has been presiding over half a mile of the river Yeo since its completion in 1612. The Grade I listed residence was built from 1608 – 1612 by Robert Harbin, a wealthy local merchant, and remained in his

family for nearly 400 years until the death of Sophie Rawlins (Sophie Wyndham Bates Harbin) in 2006. The historic property changed hands for the first time in its multi-century history in 2007 when Robin and Jane Cannon took ownership. According to Newton House’s official website, “Sixty acres were purchased with the house, forty in Somerset and twenty acres on the other side of the river, in Dorset. The enormous restoration project of both Newton House and the magnificent gardens are now complete.” The owners have spent nearly 10 years sympathetically restoring the 9 bed, 8 bath house and improving the internal rooms and configuration, whilst also bringing the property firmly into the 21st Century with modern services throughout. Notable rooms include the principal bedroom suite, the Great Hall, the ‘Justice Room’ which makes a fine study and the drawing room. The 62 acre property also includes a three-bedroom gardener’s cottage, two large garage/show rooms and various outbuildings including a greenhouse, stores, workshops, a distillery and potting shed. The property is home to a very successful business producing award-winning dry gin, with the converted the stables and coach house providing a stylish gin bar and function suite. The parkland and formal gardens are complemented by grazing land and supported by a number of domestic and commercial outbuildings. This is undeniably a rare opportunity to be the third party to purchase Newton House. The property is available for £5.65 million with Knight Frank. There is also a great video tour on Vimeo. 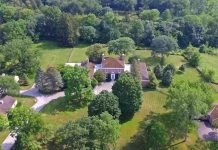 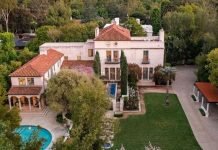 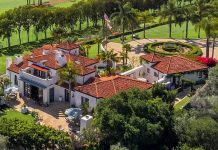 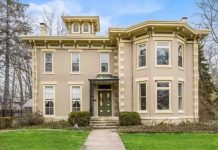