Update: June 14, 2011
The Spelling Manor has been shown since 2008 and officially on the market since 2009 – but all that means nothing now.  The home is said to have sold to 22 year old Petra Ecclestone, the heiress to a Formula One racing fortune for $85 million.  It is said she will be splitting her time between London and Los Angeles after her planned August wedding to entrepreneur James Stunt.

Quite possibility the most talked about Estate worldwide…The Spelling Manor has been the topic of interest since the early 90’s when construction begun.  People criticized the size of the Estate and claimed it was in violation of Holmby Hills zoning, however if that were the case than the home could have never been built.  Aaron & Candy Spelling built the Manor from scratch and both lived there until 2006 when Aaron Spelling passed away at the age of 83 inside the Manor.  Candy Spelling has now decided to unload this mammoth Estate for some lucky new buyer to call home.

The Estate is approx. 56,000 Sq. Ft., has over 125 Rooms, 2 Lane Bowling Alley, Gift Wrapping Room, Screening Room and even a dog grooming room.  It is situated on nearly 5 Flat Acres, making it a very rare piece of land in the heart of Holmby Hills.  There are 14 Bedrooms and 27 Bathrooms…yes 27 Bathrooms…you could almost use a different Bathroom for every day of the month.  A winding drive leads to the sprawling circular motor court with fountain and space for 100 cars.  The Grand Entry has double staircases with dramatic 30 Foot Ceilings and walls adomed with French Silk.  One of the most unique rooms of the home is the Screening Room, which is actually inside one of the Formal Living Areas.  A gigantic screen rises out of the floor while framed pictures rise to reveal the hidden projection system within the walls!  It’s hard to compare a home of this quality, size and the amount of history within it to anything else in the world..so you decide if $150,000,000 is a good deal!

Listing Details:
This legendary property displays a rich provenance. Completed in 1991, it is sited upon the former estate of famed Hollywood entertainer Bing Crosby. Comprising a palatial 56,500 square feet, few, if any, residences rival The Manor’s epic scale. Originally named L’Oiseau, or “wing of a bird,” this aureate mansion blends visionary design, passionate consideration to detail, and unique artistic touches to create a masterful opulence once only reserved for nobility. Shielded by rows of trees and the forested rough of the Los Angeles Country Club golf course, the majestic estate redefines the concept of privacy.  A gated entrance and winding drive lead to a splendid circular motor court with a fountain and space for 100 cars. The baronial fa?ade of Italian limestone enwraps the sumptuous living spaces, which are introduced by a magnificent entry with a double staircase, a dramatic 30-foot ceiling, and walls adorned with French silk. The living room is embellished with an antique marble fireplace from France, while the formal dining room is replete with an antique chandelier. A chef’s dream haven, the professional gourmet kitchen offers restaurant-quality appliances as well as a florist refrigerator. The octagonal breakfast room is lined by windows that open to the reflecting pool and an orangerie. Among the endless array of inimitable offerings are a projection room with an oak coffered ceiling and bar, a spacious family room, an oak-panelled library, an office, a service wing, and rooms designed specifically to showcase collections of silver and china. The upper level comprises the master suite complete with a grand entrance, upholstered walls, a sitting room, an office, a kitchenette, and his and her baths. The lavish accommodations are composed of seven bedrooms, including the “Prince Charles Suite”-a guest wing that was named after a visit by His Royal Highness The Prince of Wales. A SHOWMAN’S DREAM: Ideal for entertaining, the mansion’s lower level features a myriad of world-class recreational options, which include a billiards room, game room, collector’s gallery, bowling alley, temperature-controlled wine cellar and tasting room, catering kitchen, gym, and dog-grooming area. Among further highlights are a beauty salon, a first-of-its-kind gift-wrapping room, an elevator, five kitchens, five bars, and extensive staff quarters.SUPERLATIVE SURROUNDINGS: Designed by renowned landscape architect Christine London, the bucolic grounds are augmented with such halcyon splendors as vast lawns, paved walkways, gardens, imported Parisian lampposts, and a koi pond in addition to a tennis court and a pool complex. Every element of this iconic estate reveals an intricate level of attention and extraordinary care. The Manor is without question unmatched in its grandeur and scope, a superlative property designed for a modern-day dynasty. 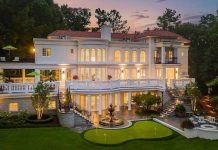 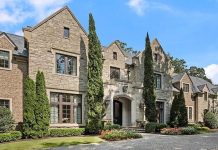 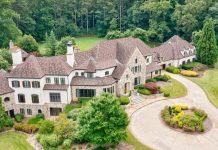 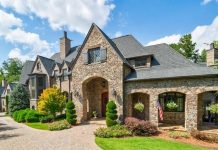 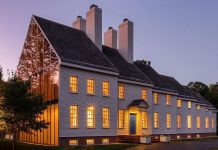 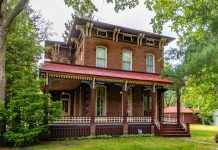