A substantial lakeside compound on Okanagan Lake that has been the source of gossip and possible celebrity links has just been named Lake Country, British Columbia’s most expensive property with a value of $9,500,000 CAD. The estate is said to span approximately 108 acres and features numerous outbuildings, a private putting green overlooking the lake, a drive leading to an elevated three vehicle garage and a winding road taking you right to the water’s edge. This is a property that I’ve been fascinated with since I was about eight years old. It was the late-1990s and word on the lake was that it was owned by Arnold Schwarzenegger. Research on the property was near impossible at the time, so it became known as Arnold’s house. In reality, it’s owned by winery mogul Dennis O’Rourke, who commissioned Nesbitt Originals to create the one-of-a-kind residence. Nearly 20 years after construction of the main house, Nesbitt Originals was commissioned once again to construct a matching lakeside “man cave” built directly against the cliff face. Very little is known about the interior of the main house, however property records reveal there are five bedrooms and ten bathrooms. Given the rugged nature of the property, the three vehicle garage sits elevated 65 feet above the base of the main house with access via elevator. Nesbitt’s first encounter with O’Rourke seemed like quite the ambitious challenge. “Upon first meeting Dennis on his steep hillside lakefront acreage, and having to use a long rope to descend down to the beach, I knew I was in for an experience of a lifetime. As a man with a vision rarely found in this industry, he explained that he was going to excavate a site to design an estate residence.Budget was never discussed as he was looking to leave a legacy for his family that could stand throughout the generations to come.” Vernon, British Columbia based builders, SilverRock, were also commissioned construct the addition. Scroll down and take a look at this unique lakeside estate. 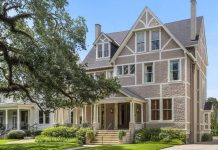 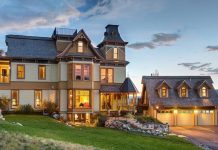 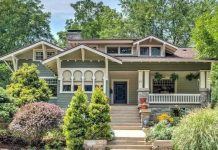 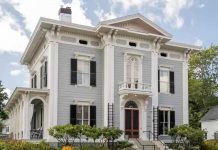 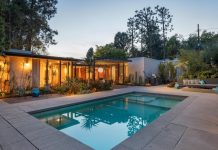 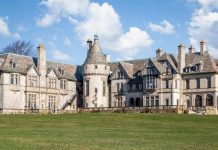